Is The End Near for Ontario’s Liberals?

Ontario has a long history of bipolar political relationships between Queen’s Park and Ottawa. As a rule, over the past 4 decades, the consistent trend is for ideological neutrality between the two parliaments, with rare few years of overlapping political stripes. With the Liberal government in Ottawa set to remain on task until the next federal general election (October 2019), this isn’t good news for Ontario’s Liberal Party.

After a year in office, Prime Minister Trudeau’s approval ratings remain high at over 50 percent, while Premier Wynne’s continue to slip dramatically. After three turbulent years as premier, Wynne’s popularity is now scraping bottom at roughly 14% popularity leaving the party scrambling. Despite the Premier’s very public insistence that she isn’t going anywhere, persistent rumors suggest Liberal party leadership contenders are starting to quietly wrestle for campaign staff and resources behind the scenes.

Premier Wynne has maintained her public schedule, including appearances at events like the Ontario Mining Association’s “Meet the Miners” where no one remembers an Ontario premier attending in the last 20 years since former Premier Mike Harris was a regular attendee. The Premier is likely to maintain a relatively active schedule to dispel rumours of an early departure while she and the party contemplate plausible exit strategies.

Overall, the news hasn’t been great for the Liberals. CTV has reported, that the Ontario Provincial Police have laid multiple bribery charges under the Election Act against the premier’s former deputy chief of staff (who became party CEO and 2018 campaign director), and a key liberal strategist and fundraiser. Including the extensive coverage of outrage over hydro rates and past mismanagement concerns and things are becoming increasingly tense for Ontario Liberal’s.

All of this remains good news for the opposition as both Conservative leader Patrick Brown and Andrea Horwarth maintain strong opportunities to generate traction and interest in the lead up to the June 2018 election. While it is very early, polls suggest that Brown sits as the leading candidate as the next prospective premier and his party has picked up some strong candidates in former federal parliamentarians who will add bench strength to the Conservative campaign including the notable addition of former Finance Minister, Joe Oliver.

What this means for organizations, associations and firms looking to influence public policy, government spending and improve their relationship with Queen’s Park is the need to adopt a strategy of absolute non-partisan advocacy. Creating policy options for consideration by parties is strong thought leadership. As organizations plan their government relations activities for the next two years, it is incumbent upon them to create clear, actionable strategies that can be adopted in full or in part as possible campaign additions. This is the time to align marketing, government relations and public relations activities to ensure the best possible outcome for their stakeholders. 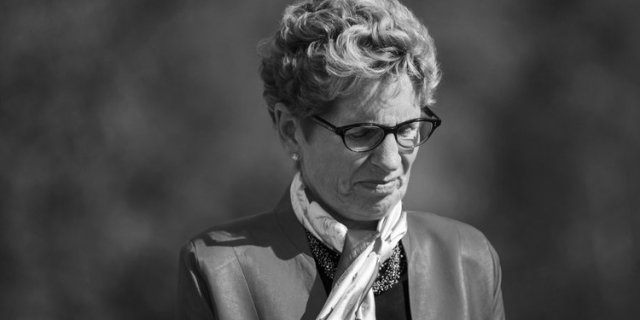 Is the end near for Ontario’s Liberals?    (Photo: Mark Blinch/CP)

This entry was posted in Uncategorized. Bookmark the permalink.

This site uses Akismet to reduce spam. Learn how your comment data is processed.